I thought I'd venture into the world of blogs. I'm testing out my computer saviness. How am I doing? I was originally looking for a way to post "Addison's Video". Check it out :)
I might as well update everybody on our life here in the big city of Toronto.
Addison is growing SO fast. She's about 15 lbs now and she's a mover and a shaker (as you can see from the video...hahaha). Addison just learned how to suck on her thumb. I'm not sure what to do about that though...lol. Everybody has advice I suppose. I do like the idea of being able to take her pacifier away instead of having her develop a habit of sucking her thumb. She has rolled around a few times and has been more tolerant of laying on her belly. She LOVES to be held, I think she likes the attention. She loves watching people too, I think even more than she likes being held. She's almost always happier when we are out around people, I think she gets bored of me and being at home. lol. She doesn't laugh out loud much but smiles ALL the time. Especially if she sees me...hehehe. *sorry spenny*
Spencers school has been going well, although he might tell you something different; so modest that boy. He will be starting exams soon so I decided that before it's too late I'd spend some more time out west with the family. I'll be leaving soon for almost a month. That will give Spencer ample time to study and have me out of his hair for the duration of exams. I was thinking that by the time I get home Addison will be 5 months old! That is 1 month away from eating food, and less than 4 months away from me going back to work...yuck :P .
We have recently been contemplating our living situation. It's nice enough where we live but we were thinking it might be nice to have 2 bedrooms. I think we will look around. It's just somewhat uncertain where we are right now. Our landlord still hasn't told us if we will be able to stay.
Well I guess that's it for my first post. I want to make this our family blog spot, so Spencer can add his two cents as well.
Cherrio!
Posted by Devenney's at 9:12 AM 2 comments: 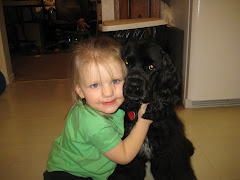